Posted on September 4, 2018 by Nicole Cosgrove 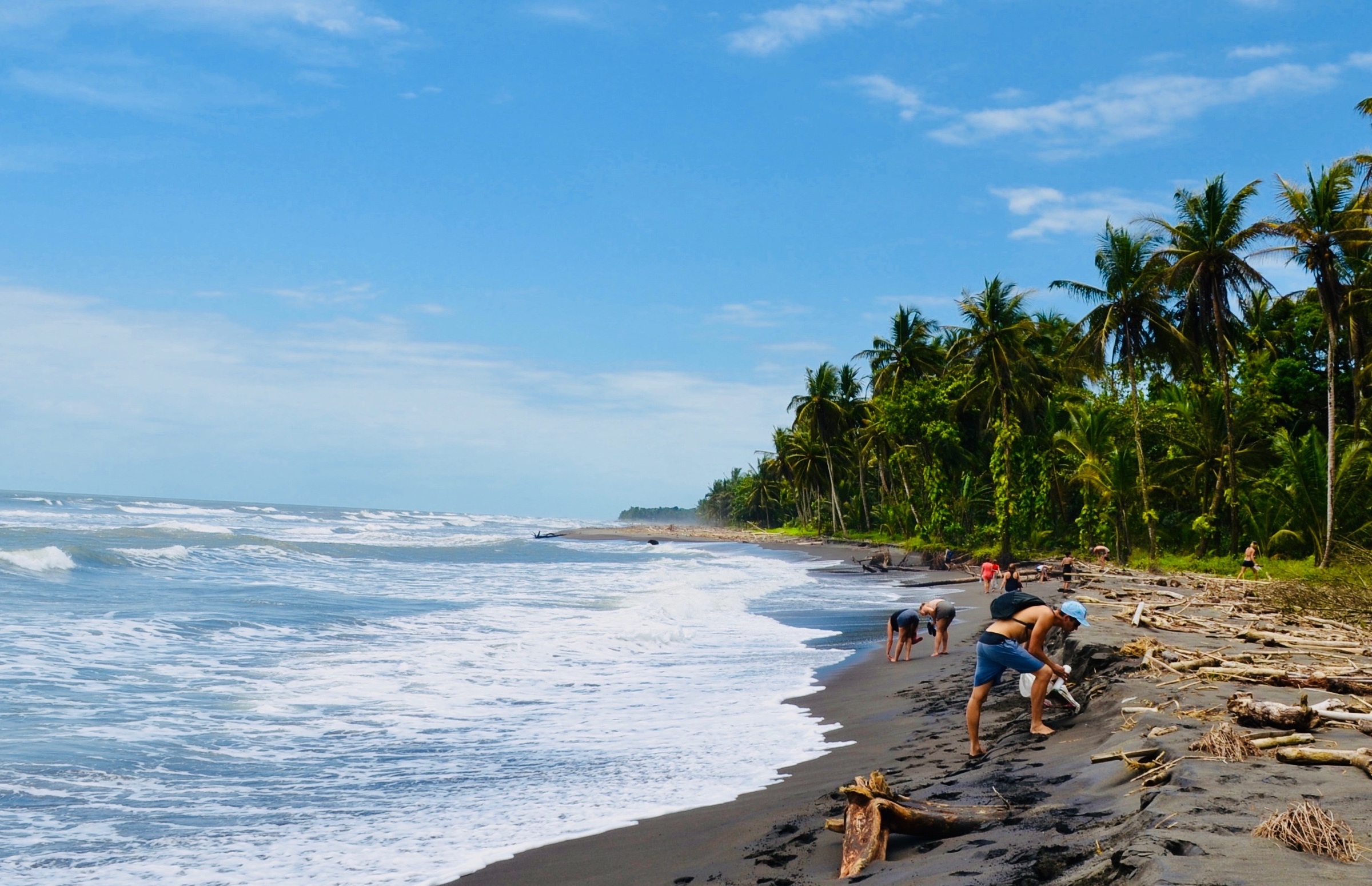 We began our 2018 Central American leg of the endless honeymoon at the Finca Rosa Blanca Coffee Plantation and Resort , which was a welcome change from the 8 hour night we spent in LAX.

Finca Rosa Blanca has been recognized as one of National Geographic’s Unique Lodges of the World, and we are honoured to say that we’ve stayed with them twice. The first time we were there was the first time we said “I love you,” so it holds a pretty special place in our hearts.

It is tranquil and secluded. The staff are incredibly welcoming and kind. And the restaurant, El Tigre Vestido has a menu to die for. There are many tours and activities you book, but why complicate things when you’re in paradise.

After 1 night of indulgence, we went on to our next greatest adventure, La Tortuga Feliz.

To learn a bit more about the organization, you can read our blog post La Tortuga Feliz or head to their website. 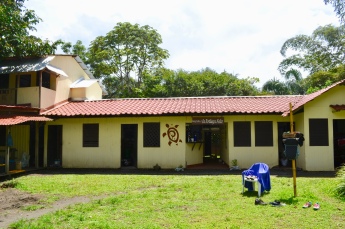 It is tranquil and secluded. The volunteers are incredibly welcoming and kind. The kitchen has a set menu, but it was to die for.

It was almost an exact replica of our first night in Costa Rica, with a few minor differences. Instead of a pool there was a violent ocean, instead of a private room with a balcony and ensuite with a jacuzzi tub, we had a shared bunk room with cold showers. But we did have a family of bats on our ceiling to help keep the mosquitoes at bay. That was an amenity they didn’t list online! 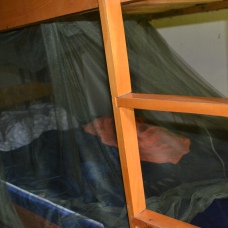 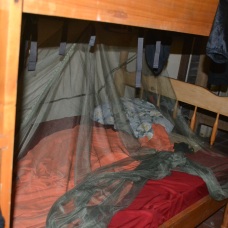 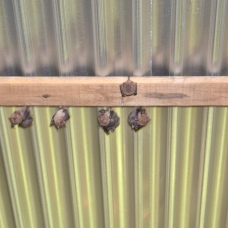 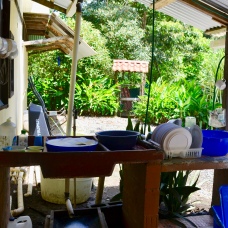 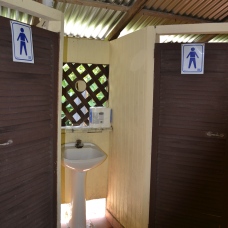 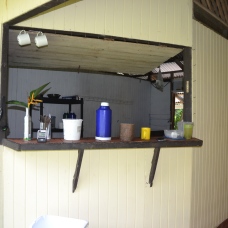 We joke, of course. This was exactly what we were looking for! Don’t get us wrong, we loved the pampering that Finca Rosa Blanca had to offer, but one would never appreciate the luxuries of life if they never roughed it for awhile. And there is no better way to be in touch with nature than by living amongst it.

We were told that since we were only there for 1 week we should be prepared to see very little. Lucky for us, seeing turtles and/or hatchlings was a hope, but it was not what was going to define the experience for us. We wanted to help out, and give back to the universe that had been so kind to us over the past few years, and especially over the past month. The low expectations were maybe what did it, but we ended up having a turtley-awesome, turtle-filled week!

To start the week, we were sent right into our first orientation shortly after settling into our honeymoon suite. We would be patrolling the beaches that night in search for laying green or hawksbill turtles (the leatherbacks were finished laying). A romantic moonlit walk on the beach, with our new friend Jay the biologist. There was a bit of fear around the whole poacher situation, but we learned there is an unwritten rule between the locals and the volunteers: whoever gets spots the turtle first gets to keep it/the eggs. This rule helped keep the beach non-violent. Phew!

We finished our orientation with our first honeymoon surprise – there had been a daytime hatch of one of the nests and they were releasing the baby leatherback turtles into the ocean! Generally these turtles hatch at night time, so they have less predators and are a lot more camouflaged…nature can be rough sometimes! The ones we were watching were the last ones out of the nest, so they weren’t as strong or fast as the others, which made for a long viewing. The photos of them coming out of the ground are kind of gross…so be warned. 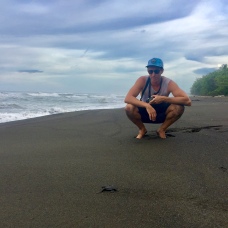 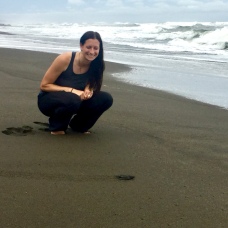 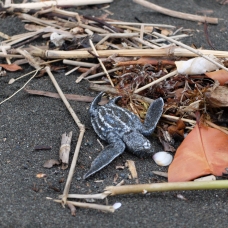 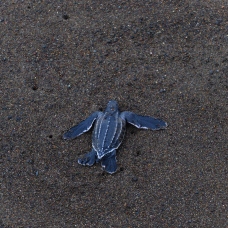 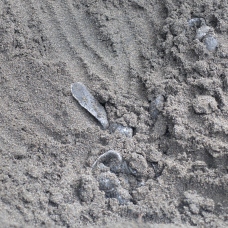 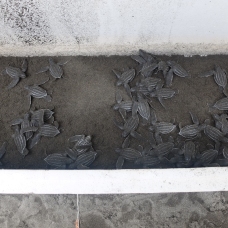 That night, on the romantic moonlit walk, we got to see our first mama green turtle! She had come out of the ocean and made 4 nests, and never ended up laying any eggs. Picky lady! We could hear her huffing and puffing as she dug, and got to watch her crawl back into the ocean. It was pretty incredible, and extremely unexpected! No pictures are allowed of the turtles at night, mainly for the protection of their vision – we were only to use red light torches.

Turtle parents of course! We had hatchery orientation the next day and learned how to dig a turtle nest – which is incredible that they can do it with their flippers! The mama turtles dig a cylindrical hole, approximately 20cm in diameter and about 70cm deep. 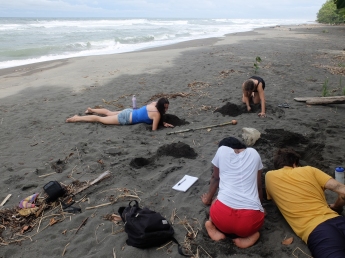 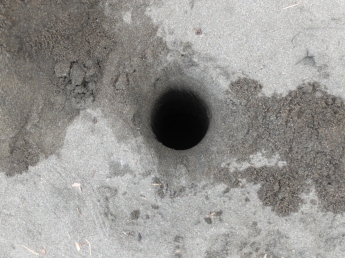 That night we had our first alone time in hours as we had a 4 hour hatchery shift. Basically, you sit in the dark and make sure no dogs or crabs come into the hatchery to try and steal the eggs.

About an hour into our shift, there was a group of about 8 local men, with white light torches on their heads, laughing and hollering, running and rolling in the sand. Talk about an adrenaline rush – John got all protective of his brand new wife – but it turns out they were just hunting for crabs. It added to the romantic atmosphere though!

Then we got to put our nest making skills to the test. A bag of eggs were brought to us about 15 minutes before our shift ended, and John got to dig the hole and we placed the eggs gently inside! In 80-90 days we will have hatchlings!

On our last night in the hatchery, we had a nest hatch! It was like a turtle volcano as they all erupted from the earth and we had to quickly measure and weigh the first 15, all by red-light. Then once they were all out, we got to take them to the beach and let them find their way to the ocean! Proud parents to 36 little leatherbacks! Hopefully at least 1 of them will survive.

Over the course of the next 12 hours a few more climbed themselves out of their nest, some a lot more worse for wear than others. And in the exhumation of the nest the following day, they found 6 more that were crawling sideways or impacted in the hard sand. 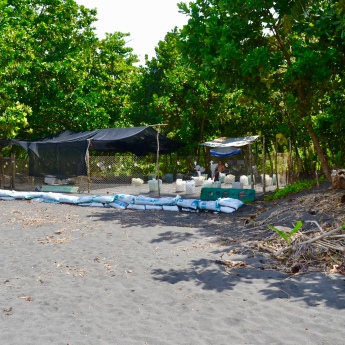 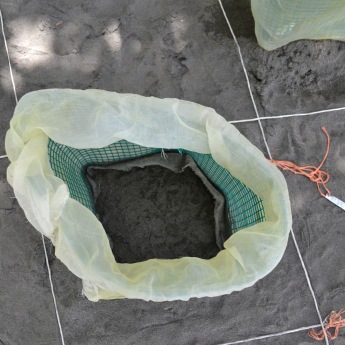 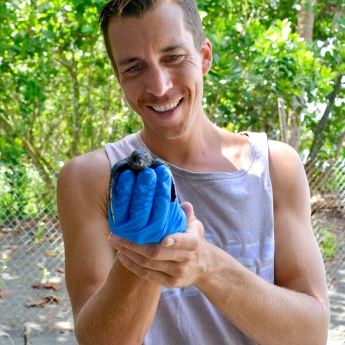 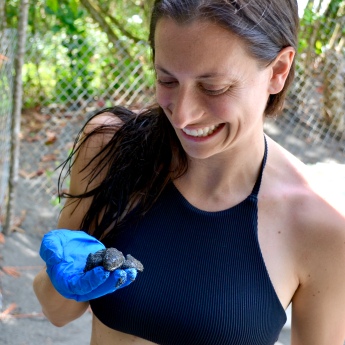 We were lucky to get the chance to spend a portion of each day sleeping or reading in the hammocks or at the beach swimming in the water. And there were a few furry friends on the island that made the days relaxing and rejuvenating. 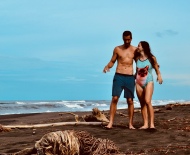 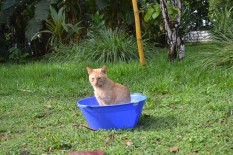 We never saw a sunrise (she rises at 530am), and the sleep deprivation made it impossible to wake up without the sound of the breakfast bell. But the sunsets and moonrises were enough to make you feel the serenity. Ah the serenity. 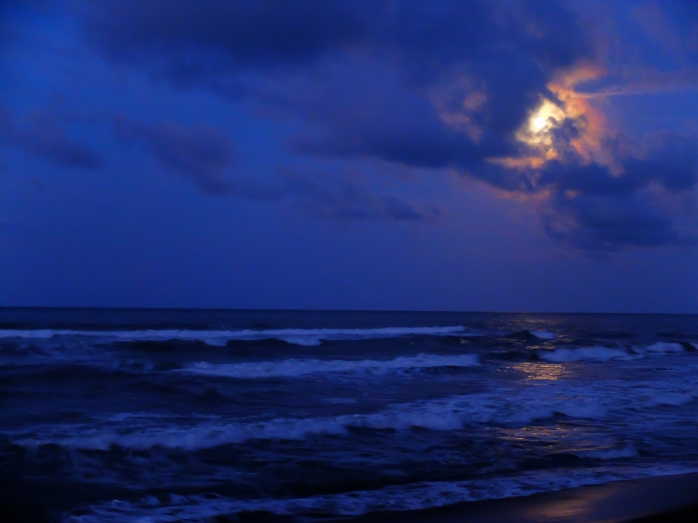 On our last night, we were separated on our patrols of the beach, because La Tortuga Feliz was shutting down for the winter so the number of volunteers was too low. It all worked out though, as John being on the early shift, found himself a sea turtle digging her nest and got to collect the eggs!

And lucky for him, she laid her eggs 4km down the beach, so he got an excellent post-wedding workout, getting him ready to get back into reality, away from our honeymoon resort.

We woke up at 430am the next day and were back in San Jose by 10am, for a shower, a snooze, and of course, some alcohol! (La Tortuga Feliz is a dry camp). We were lucky enough to get to share the night with the new amazing friends we met while on the island – privacy after so many days of none just feels weird.

We couldn’t have asked for a better honeymoon experience and would highly recommend it to any of you reading, whether you’re honeymooning or not. It wasn’t like a hostel, where you could be in a room with any type of person. Everyone’s there because of a shared enjoyment of nature and wanting to help.

Finca Rosa Blanca was beautiful in its own right, but the beauty La Tortuga Feliz offered us was more than we can ever put into pictures or words.

← Aloha from Kona
The Sky’s the Limit →