The Sky’s the Limit

One of the best places in the world to view the stars is atop Mauna Kea. If you’re heading to The Big Island, you have to check it out (or at least attempt it!).

The drive is just over an hour, up from sea level to 9200ft to the Onizuka Visitor Centre.

When we left home, the star show was still on. When we arrived at the centre, they had cancelled it due to cloud coverage and poor visibility – so keep in mind, things can change quickly. It was still worth the drive.

You will be asked to wait for 30 minutes to acclimatize to the elevation, and then be cleared to drive up to the sky.

The telescopes live at the summit, which is at 13,802ft. A true 4×4 is absolutely necessary to make the drive up, and they are pretty good at scaring you into driving as safe as possible (showing photos of the worst case scenario crashes and slips in the visitor centre).

Now John is a good driver. The roads were built well. But the last time we said “adventure!” in a 4×4, we were in Costa Rica, the 4wd broke, we half tipped our SUV, got stuck on a back road in farm land, and had to wander for a couple km to find someone to help pull us out. In the end, it all worked out better than we could have ever expected (that’s a story for another time), but John didn’t want to risk a stressful situation like that again. Fair enough.

We got about 10 minutes up the hill, and then turned around and went back down about 3 minutes. We sat for about 5 minutes, and then decided to turn around and go back up again. And we’re so happy we did.

About 5 minutes before you reach the top, there’s a paved road. An oasis for those who stick it out and make it that far.

We were passed by a convoy of white SUVs labeled “Researchers.” We followed them up the hill and came up to our first telescopes. It felt like we were driving onto another planet, or onto a movie set.

The view at the top is breathtaking. The significance of the summit, both spiritually to the Hawaiians and scientifically to modern astronomy, was awe-inspiring. The temperature drop was fascinating.

We were above the clouds, and we were on a sacred peak. We could feel the spiritual energy as soon as we stepped out of our jeep. The journey up was powerful even in a car, imagining a pilgrimage to the top, without modern hiking gear, seemed supernatural. 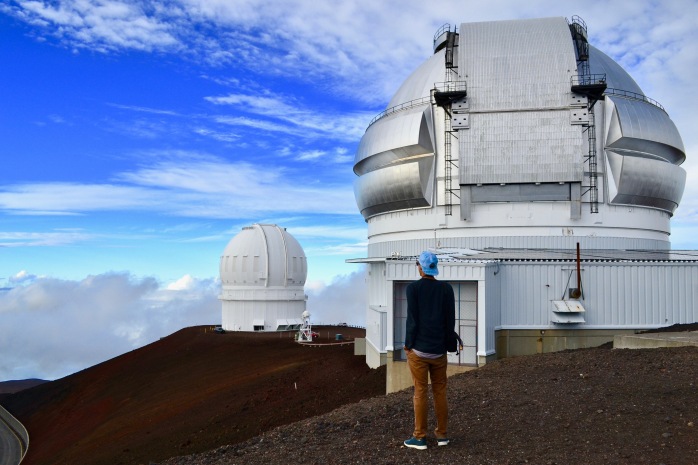 They told us that they experience near freezing temperatures at the Visitor Information Centre and the summit. “Surely, being Hawaiian’s, they’re just exaggerating,” we thought.

We thought wrong. It was cold. Piercing cold. We put on all the clothes we had in the car just to get a few pictures, but then we just drove around the different access roads and snapped some shots from inside the car. The summit was actually about a 10 minute hike up from the topmost carpark, we didn’t have the warmth to do it. No regrets, it was seriously that cold.

Check out our Hawaii gallery for more pictures.

We even had the pleasure of meeting a T-Rex at the top!

It was hard to take a good picture, being that we were freezing. A T-Rex suit filled with hot air was a wonderful idea.

We watched the sunset and began our descent, back to civilization and back to the warm ocean breeze. We went from 40F (4.5C) to 80F (26.7C) in under an hour!

There was a few teachings about the Hawaiian mythology that surrounded Mauna Kea in the Visitor Centre, beautifully describing the natural world’s mysteries through the actions and behaviours of the goddesses Poli’ahu (the snow and ice goddess) and her rival Pele (the goddess of fire). We would have loved to learn more.

It just shows that modern science takes precedence up there. There are a few Hawaiian groups that work to protect the sacred Mauna Kea, and have been delaying the building of a new telescope. It’s a battle of history and exploration.
If you’re interested in further reading, here are some interesting links.
Poli’ahu and Pele
The Myths and Legends of Poli’ahu
Delay on Telescope Build

We love science, we love astronomy, we love watching our fellow humans enter new frontiers and advance humankind. But having been to the top of Mauna Kea, we feel extremely privileged to have experienced the energy it holds.

We highly recommend the drive up, if you like science, stars or spirituality. If you do make it to the top, bring an open mind and heart, close your eyes, and feel the amazing spirits and discoveries that transcend time at Mauna Kea’s peak.